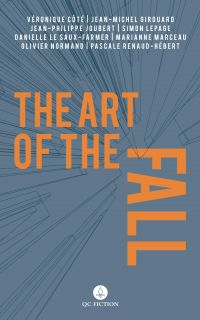 The Art of the Fall

September 2008. Alice is 34, a Quebec artist working in London, England. During her residency there, Lehman Brothers, where her friend Laurence works, goes bankrupt. And that same evening, she attends an auction by Damien Hirst. Gregory Monroe, an art collector and hedge fund manager, is also at the auction—and their lives will never be the same again.

As the financial crisis strikes and two worlds collide, this love story explores the darkest corners of the contemporary art scene, the global economy, and two broken hearts.

Towards the end of the 18th century, twenty-four traders would meet under a tree to buy and sell shares. The tree was located at 68 Wall Street, so called because of a wall that used to mark the northern limits of the colony of New Amsterdam, on the Island of Manhattan.

On May 17, 1792, the twenty-four brokers signed, beneath the tree, the Buttonwood Agreement. This marked the foundation of the New York Stock Exchange, and the birth of Wall Street.

Today, the tree on Wall Street has long since fallen. And the twenty-four traders’ transactions, brokered in the shade of a plane tree, have become complex to the point of being almost intangible and immaterial.

“I was swept along from Quebec to London to New York, learning about the volatile world of finance and the contemporary art world […] The relationship between Alice and Greg (which echoes the relationship between art and finance) is intense, tempestuous, and all-too-brief. Entertaining and informative, The Art of the Fall is well worth a read.” (James Fisher, The Miramichi Reader)

Virtually every scene reveals the workings of the art world or unpacks an economic episode or principle. […] The play has the rhythm and complexity of the finest stories, the inventiveness and zaniness of a saga. We can almost never predict how the story will unfold.” Le Soleil

“[The Art of the Fall] brings together an impressive collective of creative minds around the themes of art and the economy: are these spheres really so very far removed from one another? Cerebral and dry though the premise might first appear, the result is nevertheless a performance of remarkable depth.” Le Devoir